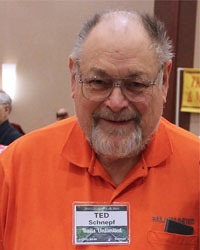 Ted Schnepf is a major O Scale dealer. He manufactures fine scale car resin kits, sells unique railroad photos and has a custom line of O scale decals. He frequently opens his huge Milwaukee Road layout to visitors introducing most to real operating sessions. His layout is a must see event.

“I started with a Marx train and a Model Trains magazine subscription, but by high school had found On3. College (civil engineer), Military service (army-Vietnam), and a 28 year railroad career (Milw, ELS, Wis DOT, BNSF), with five moves, slowed On3 modeling.

My model railroad business, Rails Unlimited, started in 1983, at first part time between railroad jobs, and then in 1998 as a full time business. Selling at my first March O scale meet was in 1985, now 33 years ago. About two years later started selling the urethane O scale cars. Today the Rails Unlimited urethane car line has 30 models and growing.

In 1989, we built a new home, with a large basement. I organized Fox Valley O Scalers club, to help with construction of a standard gauge layout with some On3. first track was laid in 1990, followed by the first O scale meet open house in 7/92, for the Chicago O Scale National. Thousands of visitors of all scales have toured the layout over the years, including participants of the annual Chicago O Scale Meet in March. Probably the most famous visitor was hall of famer John Armstrong. I once had two major model railroad magazine editors visit the layout during an RPM op session and were at arm’s length of each other.

The layout (basement) was expanded in 2007. The layout has several unique features. There is a 90 foot long , 8 track, reversing loop hanging from the ceiling. At one point two yards are piggybacked above each other in mushroom style. The railroad’s long mainline climbs through grades, with no helixes, to reach all levels, from knee height to well over 7.5 feet above the floor.. The model features five large yards, with 585 car capacity, and a future yard with another 390 car capacity. The layout has five generous staging yards for about 2000 cars. The second level of the layout is cantilevered from the wall, so there is no support posts interfering with the lower sceniced level. The track work uses large #8 and #10 hand laid turnouts. the smallest turnout, infrequently used is a #7. The track plan uses many double end tracks. The layout includes large railroad size industries, such as a seven foot long freight house. Many structures are built to match specific prototypes.”