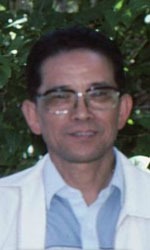 Mr. Kimpei Sofue was one of top custom builders for O-scale brass models. In 1922, he was born in Tokyo. Got a job in Tokyo Keiki Industry Co., Ltd. in 1937, learned four years in the company’s technical training school while working. Participation in the production of O scale model of Katsumi Model Shop (KTM) in 1945. Poised a workshop at Gyoda, Saitama Independent in 1962, accepted orders from Katsumi. Opened the Sofue Works at Kumagaya, Saitama in 1964, began to custom-build including the Sofue-Projects. In 2009, died at the age of 86.

“The Most Famous O Scaler Nobody Ever Heard of”

O scale would not be the same without the 14,000 brass locomotives and many thousands of freight cars produced by Kempei Sofue of Tokyo, Japan under the KTM name and imported by Max Gray, US Hobbies and – later – Westside in the 1950s, 60s and 70s. The man who built the engines for Max Grey and others is Kimpei Sofue, to whom all O scalers owe a debt of gratitude. Sofue was an enthusiastic model railroader, an admirer of American steam locomotives, an engineering mastermind and a true craftsman. He engineered and built models of dozens of different engines for importers, as well as smaller numbers of models later manufactured and imported in his own name.

The models produced by Mr. Sofue were well-engineered and built to very high standards. KTM engines propelled the scale forward in both scale fidelity and performance: milled brass frames, heavy brass construction, correctly tapered boilers. KTM gearboxes were standard on KTM engines, but Sofue later developed engines with three-thread worm gears, coreless motors, ball bearing drives, fully equalized and sprung suspensions, low-drag wheel sets and one touch coupling with electrical connection between engine and tender. Other builders and importers built on Mr. Sofue’s work. Even today, the principles and standards established by Sofue for KTM and his own models are applied by other manufacturers and modelers.

Despite our long love affair with brass models, no one involved in their actual manufacture has ever been recognized for inclusion in the O Scale Hall of Fame. Indeed, no foreigner has ever been so honored. Kempei Sofue richly deserves to be the first. Thanks for your consideration.&

Thanks to Tad Daito, a long-time friend of Kempei Sofue, for bringing his story to the attention of the O Scale community! Tad and his Wife Akiko are attending SONC from their home in Japan.