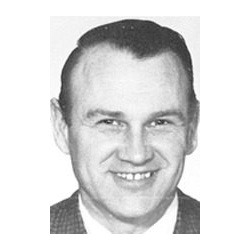 Alvin F. Staufer was born in Fairfield, Alabama. He moved to the Cleveland area early in life. Al and his wife and 4 children spent most of their early life on 2 farms, one in Coshocton County and the other in Remsen Corners.

Al spent his WWII Navy career, 1943-1946, in the engine room of a steam powered transport ship. He also attend the Navy Diesel Engine school which proved valuable in the preparation of parts of his railroad books. Al had an outgoing personality as he could stir up a conversation with most anyone. He was a staunch political conservative and dreaded this nation’s drift toward Socialism and the inevitable debts and loss of freedom to our future generations.

Al detested what he called “the soft people” . They include the unrealistic do-gooders usually from inherited wealth and phony critics whose fault is not knowing what life’s strife is all about— mostly because neither ever had the experience of a good day’s manual labor. Al also was very proud of his German heritage as he often remarked about the great success of the German people as scientists and great musicians. He had models of some German ships and recognized for example the great German Luftwaffe Ace pilot Eric Hartmann.

Al Staufer was a self published author of railroad books. He co-authored 11 volumes about eastern railroads. He was a great proponent of O Scale heading up 2 national O Scale conventions in the Cleveland area and in 1983 supported the beginning of the still functioning Cleveland 2-rail O Scale Show. Under Al’s leadership the 1971 Cleveland O Scale National was the first to offer a professional format including layout tours and a banquet which provided a forum for future O Scale Nationals.

He was a talented artist and taught as an art teacher in many schools. He enjoyed collecting O-Scale trains, polka music and was a member of TCA. Alvin loved nature and was a strong believer in nature conservation.

In regards to trains Al put it this way, ” They say the best labors are labors of love.” Al certainly agreed for his lifelong attraction to trains was evident in his books, paintings and toy train collecting hobby.