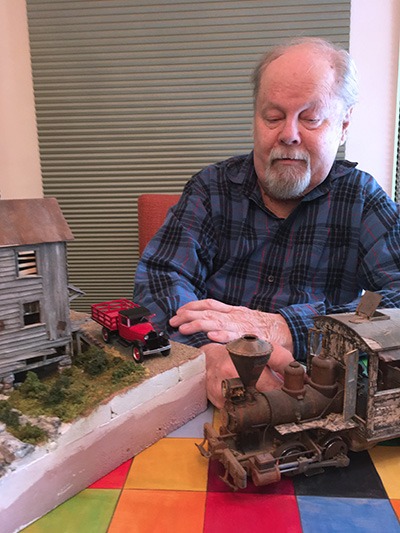 Tom Yorke is a master model builder who introduced numerous craftsman kits to O scale. He launched Thomas A. Yorke Enterprises in 1974 while working for Walt Disney Imagineering (then known as WED) in Southern California. In 1973 he had noticed a lack of detailed structure kits in O scale, and began designing several kits based on Hydrocal castings from molds that he created. From simple retail establishments, as the business grew the scope and detail of the kits increased. Notable kits included a small roundhouse, a railroad machine shop, a two-stall engine house, a two-story apartment building, a farmers’ grain co-op, and a great many others.

Tom’s models reflect his knowledge of architecture, which he studied as an undergraduate at the University of Florida, before changing his major to advertising design. Prior to his career at Disney, he worked at several advertising agencies and a model-building company.

Tom’s interest in railroads began as a child, and when growing up he had an American Flyer S-gauge layout. In those early years he was an avid builder of models from kits, especially model cars, some of which he customized.

During the past decade, Tom has produced an occasional limited-run kit, and also offered his services as a custom builder for various clients seeking models of specific buildings. Among his published articles was one featuring two custom-built depots for a Southern Pacific O-scale layout: the historic SP depots in Glendale and Santa Barbara (“A Tale of Two Depots” in Railroad Model Craftsman, about a decade ago). His articles have appeared in six different model railroading magazines over the years. He has also published 12 booklets of railroad history and drawings of interest to model railroaders.

After 45 years of manufacturing, Tom has finally decided to retire, to devote his time to his own O scale layout, But he is still doing occasional custom models for those interested in taking advantage of his architectural and model-building expertise.