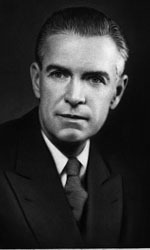 One of the pioneers of O scale, he is best known for the large exhibit layouts he constructed. He built the San Diego & Santa Fe for the exposition in 1935 in San Diego and built the Texas & Santa Fe layout for the Texas Centennial Exposition in 1936. And in the late 1930’s he built the Museum &; Santa Fe Railroad at the Chicago Museum of Science and Industry, which was Q gauge, 1 and 3/16ths. He likely participated in several of the other large exhibitions of the late 1930s and early 1940s.

The earliest reference, in the June 1936 Model Railroader, says that Cronkhite, H. B. Vanderhoef, and Carl Otto Noack in 1924 developed “…the first O gauge scale models that could be called such by present day standards.” Cronkhite and Vanderhoef were in business together as Crovan Railway Models which seems to be a combination of their names, but note that the Model Railroader credits Carl as being the head of Crovan until he died in 1936.

And no, Minton was not Walter’s older brother.