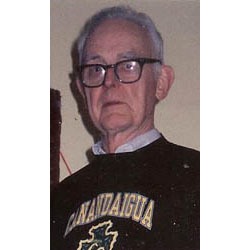 John Armstrong is a unique member of the O Scale Hall of Fame, as his fame extends far beyond the borders of the O scale community. He is respected in the model railroading world as the “Dean of Track Planning,” as well as in the railroad industry for such works as his introductory text, “The Railroad: What It Is, What it Does,” published by Simmons Boardman. Many of his other writings dealing with 12 inches to the foot scale, the only scale he considers superior to O, have been featured in Railway Age, and Trains.

John is probably the foremost advocate of the thesis that layout design should reflect actual railroad operations. Although he gently demurs when the word “inventor” is used, such concepts as walk-around control, staging, and multiple level construction were and are popularized by his writings, all in support of the original thesis.

He has the ability to connect, not only with the advanced modeler, but with the beginner. With Thaddeus Stepek (my personal pick for the next Hall of Fame nomination; vote early and Get Started in 2-Rail Scale Realistic • Accurate • Affordable Come Discover Modern O-Scale Models at These 2-Rail O-Scale Meets vote often!), he created the little Atlas trackplan pamphlets that many of us started with. For intermediate and advanced modelers, his several Kalmbach books, such as Track Planning for Realistic Operation, and numerous articles in Model Railroader over the years, are real treasures of ideas and techniques. For those who want to avail themselves of his services, he has created some 200 custom layout designs, based on the individual’s “givens and druthers,” and available space.

John is one of the founders of our O Scale group in the DC area, has been very active with the NMRA for some 50 years, especially with the Layout Design Special Interest Group, and his clinics pack ’em in for miles. He taught me that association with your peers makes you a better modeler. The social aspects of the modeling community allow people to share ideas, results, and many stories ending with the oft used phrase, “…and I never tried THAT again!”

Through it all, John maintains a lively sense of humor and (running the risk of embarrassing him with this flowery prose) is that rarest of humans, a true gentleman. If you want to know the definitions of some of the popular Armstrong- isms, such as a “blob,” a “reverted loop”, or whether something is “sincere,” read one of his books or take in one of his clinics. Don’t forget to come to DC for the National in 2004 (a shameless plug!) and visit his Canandaigua Southern, justifiably famed as the only model railroad featured in a painting by the late Ted Rose. You won’t wonder why he’s a member of the O Scale Hall of Fame.